Science is best learned when we embark on an inquiry. The students of stage 4 are slowly evolving into young scientists every day. Either it’s Fair testing or it’s reading and researching or even conducting an experiment, their enthusiasm is commendable. So the concept of chemical change was tested by the students of Stage 4 by conducting 2 experiments. One was solely done by the students where they placed an iron nail on a towel immersed in water and observed the nail for 4 days. They were amazed to see the brownish red powder , commonly called rust formed on the iron nail, even stained the towel.
Next , it was time for some action . So in came Baking Powder and Vinegar which when combined fizzed with the release of Carbon Dioxide and a white powder (precipitate).
All in all a fun filled session with some solid learning packed into it! 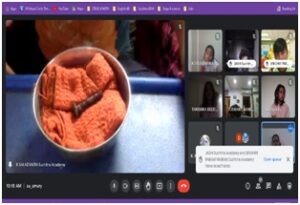