11th February, 2021- An AFS QUIZ competition was conducted on the theme – The Study of Seven Countries. 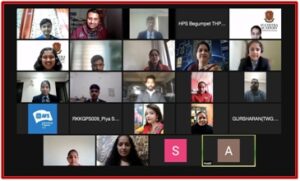