Awareness session on ‘good touch and bad touch’ was dealt in QCT session of Stage I. 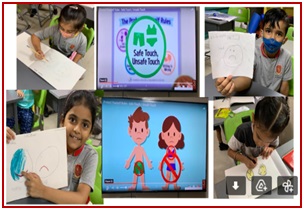 ‘Safe and unsafe touch’ was done in the QCT session for the learners of Stage I. The class started with the golden rules of QCT and continued with the fun activity where the children drew a ‘happy’ face on one circle and a ‘sad’ face on the other. They were asked thought-provoking questions in the class like: ‘Did you make a new friend?’ ‘Did you have a fight with a friend?’ ‘Did you get a hug from your parents?’ Learners expressed their views about how they felt by showing a smiley.
A short video was played about safe and unsafe touch sensitizing the learners about who is allowed to touch their body and who is not with the main emphasis on educating them about “Self Protection”. They were explained what a good touch or a bad touch is, stranger danger and abuse. The essence of safety was well projected in the video followed by open interaction and discussion amongst them. They were taught and encouraged how to keep their parts of the body safe. 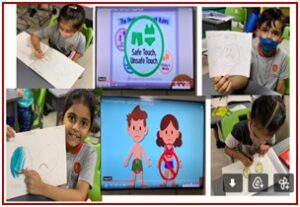