24th August 2022 : ‘My learning, My discovery!’ is an initiative to promote students of grade XII to discover what they wish to learn that is not taught. 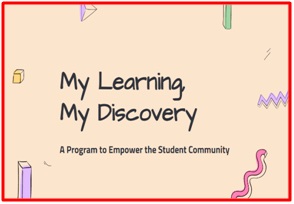 The art of thinking can exercise the brain, as well as the entire body. The test of intelligence is not how much the children know, but how they behave when they don’t know what to do. ‘My learning, my discovery!’ is an initiative to promote students to discover what they wish to learn that is not taught. This initiative allows children to research and look for real problems that they have to solve. On 24th August 2022, the students of Grade XII who are just a step away from taking a plunge into worldly life took up this challenge.
A group of students: Deeksha Reddy, Aditi Kedia and Shashank of Grade XII A who generally are quiet had the following to say:
When we started discussing what we should teach, we realised that, as 12th Graders, something that could be extremely helpful was a guide on writing essays and SOPs for applications to colleges and universities. Thus, after having decided on our topic, we began our research on essay writing, format of an SOP, which countries require them for applications etc. On the day of our presentation, we spoke about all the aforementioned points and at the end, asked our classmates to write the introduction paragraph to their own SOPs. The introduction of an SOP usually contains a peek into the background of the applicant and also tells the admissions officer how the applicant came to be interested in their chosen field/course. Our classmates did a wonderful job! Ms. Mithu – Coordinator Senior Secondary who observed the class said, “I wish someone took up this kind of an initiative when I was in Grade XII.” Below are a few of the best introduction writing tasks:

CHARVI
Video Games! Addiction! Are they not related? Well, that’s what I thought. As a child, I had always had a certain distaste towards electronic games. Constantly playing the same old game sounds boring. But when I watched my brother play, I was amazed with the high-end graphics and how smooth the transition was. And then came the research about what and how to become a graphic designer. For my plus two, I chose a non-medical field and information practices as my optional subject. I have strengthened my programming skills along with another technological knowledge. Further, I plan to clear JEE Mains and complete my undergraduation with a Bachelor’s in Technology.

PREKSHA
Since my childhood, I have always been keenly interested in planes and air crafts, fascinated by the Air force training which took place behind my house every morning. Striving for excellence with determination I decided to apply to the Indira Gandhi Rashtriya Udaan Academy near Delhi, at the same time my father encouraged me to try for the National Defence Academy. I decided to work hard aiming for an excellent score in the NDA examinations. I have studied non – medical science post tenth, deeply interested in my major subjects. Putting in extra effort after school and starting my coaching as early as in eleventh grade, I achieved an excellent score in academics along with participating in many extra-curricular activities. I am aiming to be a Pilot with a degree in B.Sc. Aviation along with a commercial pilot licence from your esteemed institution.

KRISHIV
I was introduced to coding and programming relatively late in life. It all began in 11th grade when I opted for the subject of informatic practices, and was immediately plunged into the world of Python and SQL. It didn’t take me long to realize that I had discovered something worth cherishing and pursuing. Outside of school I began practicing and producing small programmes of Python in my spare time, while also engaging in YouTube tutorials for the same. By this point I was completely immersed in the subject, and had decided that computer science as a major in college would prove to be a stimulating and suitable course for me to achieve my dreams in the field.
Later on in 12th grade, I also participated in an internship where we integrated ML and AI to apply in an application that would provide weather and climate updates to agricultural companies. Glimpsing a world of AI and ML, which could in turn be applied in harmony with programming, led me to apply to Carnegie Mellon University.
Your university has an AI programme that is unrivalled by any other university in the entire country. By being allowed to take part in your course, I’d be able to broaden my horizons as a computer science graduate, which would in turn allow me to be as effective as possible in any future positions I might hold in companies I work for. This is my main motivation in applying to your university, but other factors that convinced me to do the same were the sprawling campus, the faculty and the diverse and culturally rich student body. 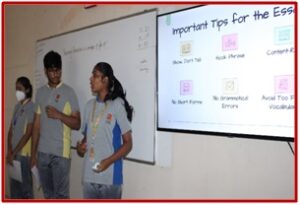